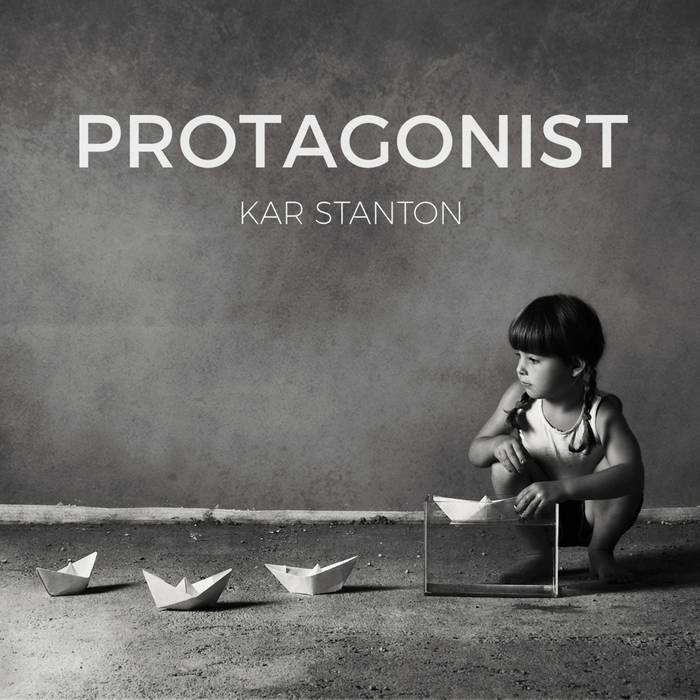 All songs written, arranged and performed by Kar Stanton
Engineering and mixing by Matt Musial at The Burrow Bournemouth, except 'The Body Count' which was mixed by Lola Demo at Strudel Girl Studios on Ithaca, Greece
Mastering by Pete Maher
Photography by Monika Koclajda
All instruments were played or programmed by Kar Stanton, except for the drums on 'In The Darkness' and the arpeggiator synth on 'New Year' which were played by Matt Musial

Track Name: She Can
She'll create a beat that will make you weep
She can do it right now standing at the station
She can make you cry reading black and white
Turning up the colour and turning on the light
I can see you brother on the other side of the world
Give me a smile and tell me you're alright
Cos now that everybody's got a story starring the girl
She can, she will

She can, she will, watch her

She can, she will, watch her

I'll create a beat that will make you weep
I can do it right now standing at the station
I can make you cry reading black and white
Turning up the colour and turning on the light
I can see you brother on the other side of the world
Give me a smile and tell me you're alright
Cos now that everybody's got a story starring the girl
I can, I will
I can, I will, watch me
Track Name: New Year
We're going out, we're going out
Oh we never go out anymore
We're dressing up, we're dressing up
Oh we never dress up anymore

But tonight, tonight,
you know we feel more alive

Cos tonight tonight
You know I feel more alive

He knows, he knows how it goes

He knows, he knows how it goes
Track Name: The Body Count
I hear the body count
An enquiry's being announced
I can't feel anything at all
Couldn't cry if I wanted to

(One day it's gonna go off like a bomb
I'll see clearly what I should have done
Everything I've been ignoring
All the things I've been avoiding)
Track Name: Overcome The Monster
The pasts not gonna change
Leave it in its place
You didn't know what you know now
You were not full grown, no

I want a simple life

She's new, she's youth in bloom
Her blood's redder, her skin's softer
She is the vigour, She is the colour

She's new, she's youth in bloom
You do what you do to feel as good as you can.

And I want a new skin
And I want a new everything
Track Name: Back To Reality
I took myself to a meeting with another me
She spoke a soothing delusion, told a comforting story
I'm on the radio, I'm an expert
I'm in the studio, I'm an artist

I was singing splendid nonsense in the back seat of the car
I'm in the space ship, I am the captain
And all my crew have names like sycamore
We're drawing pictures, we're drawing spaceships
Were telling stories were making words up

I was painting, trees and faces
City landscapes, street lights and pavements
We went to the gigs, we knew all the words
I'm making mix tapes, you're making mix tapes
If we had met when we were seventeen
I think we would have been best friends

Now let's do a video, I'll do the tune, you do the cartoon
Tonight lets go to a gig, discover the best band in the world

Bandcamp Daily  your guide to the world of Bandcamp

Featuring Oakland sounds from the Smart Bomb collective and Samplelov.